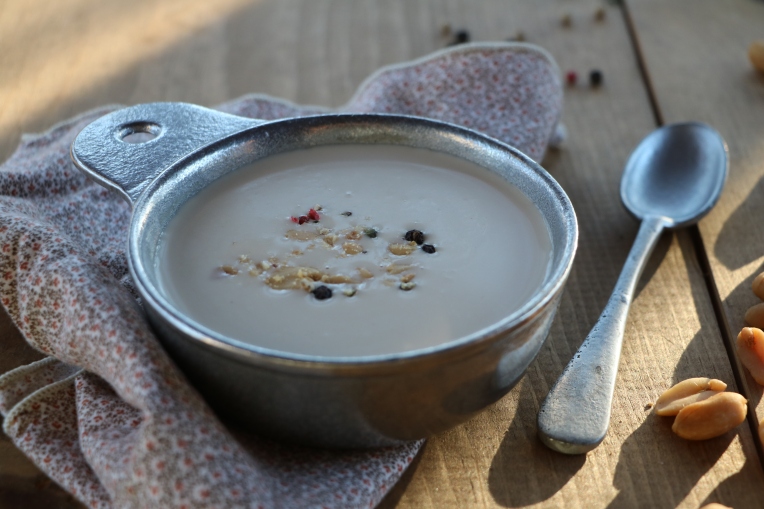 A few weeks ago, we spent a day at Colonial Williamsburg. Once the capitol of Virginia, it was one of the places where the forefathers of our nation discussed the idea of independence from Great Britain. I loved seeing it all and I was fascinated by the period’s methods of using fire and hot embers to do all the baking and cooking. 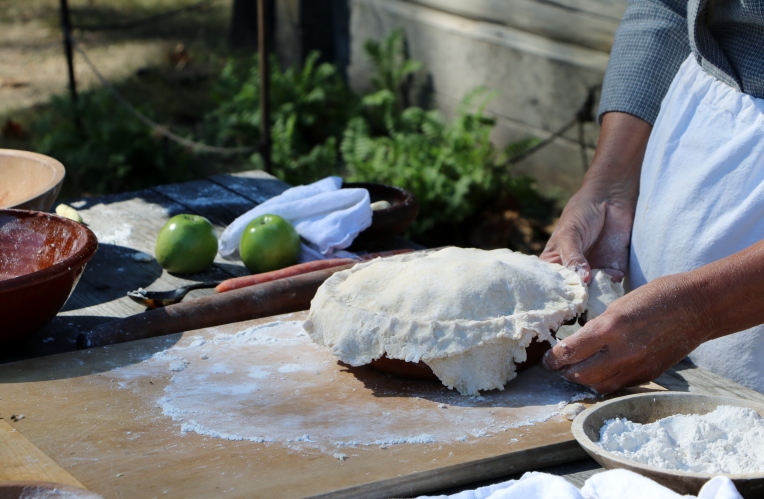 When Roy was in grade school, his family went on vacation to Williamsburg. While they were there, they ate at King’s Arms Tavern . He wanted to revisit it, so we went for dinner. He remembered eating on pewter plates and having the peanut soup – so of course we had to order it. I was doubtful about trying it, but found it was delicious! Since I was cold and hungry, it hit the spot. However, I shared a cup of it with Roy and since it’s such rich stuff, that was plenty. I detected a sort of bacon flavor in it and I asked the waiter about it. He said, “Oh – that’s the ham broth in it.” 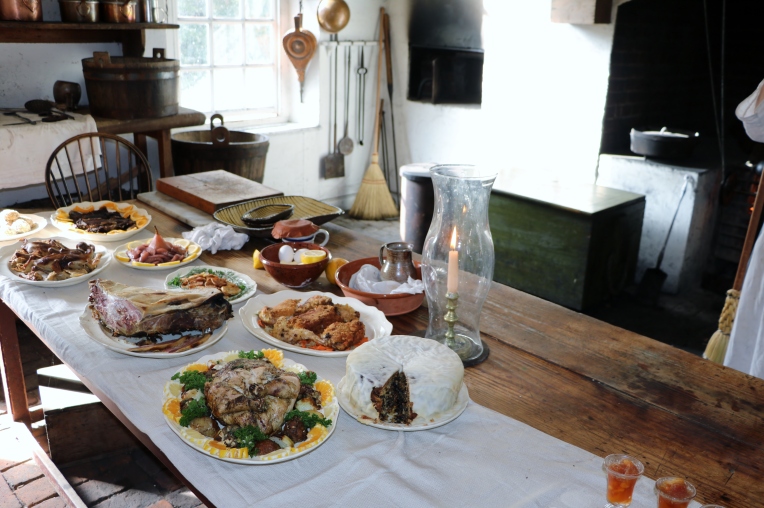 Later in the trip we saw Roy’s brother Bruce and his wife Betsy. We were telling them about our visit to Williamsburg and she whipped out her copy of The Williamsburg Cookbook. She told us she used to make their peanut soup at Thanksgiving and showed us the recipe. It called for chicken broth which I’m sure is fine, but I was still remembering that ham flavor in the soup we had. So, I took the recipe in the cookbook and modified it just a bit by making ham broth and using it to make the soup. It’s not something to have everyday, but it is fun for something different and children might find it interesting if they are studying US history. The cookbook said it is also good served cold. 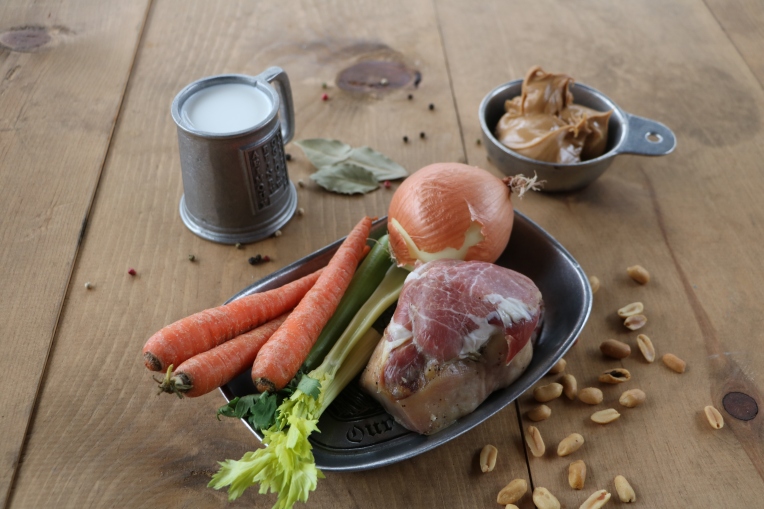 Ingredients for the Ham Broth:

2 or 3 celery stalks with leaves if possible 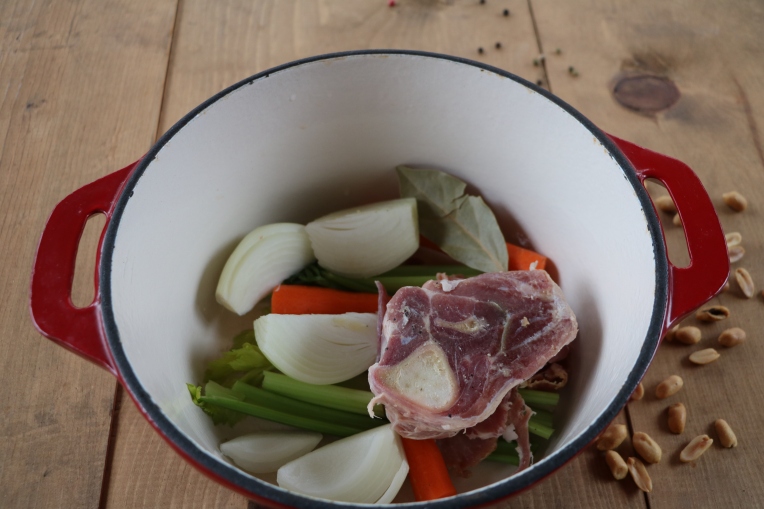 Make the ham broth by placing the ham hock, onion, celery, carrot, bay leaf, pepper corns, and water in a large pot. Bring to a boil, then turn the heat down to medium and allow the mixture to simmer for an hour. Discard the vegetables. Skim off any frothy stuff that might raise to the top. Let it cool slightly, then use a fine mesh strainer or cheese cloth to get rid of any remaining pieces of the vegetables as you pour it into a container. Refrigerate for several hours or over night. The fat will rise to the top and it will be easy to get rid of it before adding the broth to the soup.

To then make the soup… 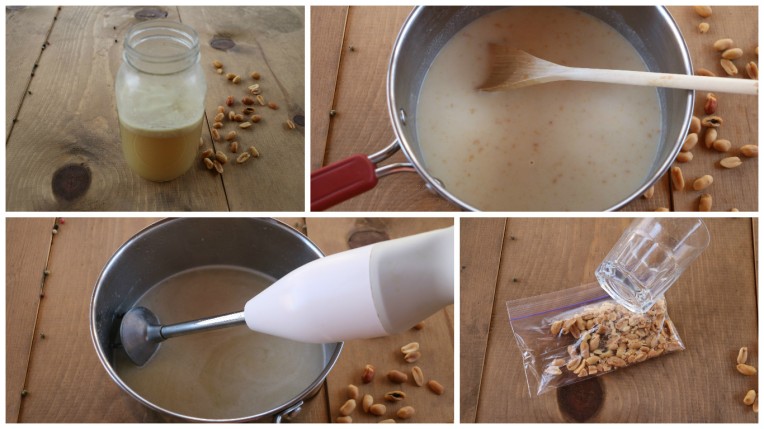 Melt the butter in large soup pot. Saute the diced onion and celery over medium low heat until they are very soft and tender, but not brown.  Add the flour and combine well. Over high heat, whisk in the broth a bit at a time. Bring to a boil. Transfer to a blender, food processor,  or use an immersion blender to puree the vegetables into the broth. Add the peanut butter and cream. Stir or blend again to completely combine all the ingredients. If needed, heat before serving, but don’t let the soup come to a boil. Ladle into serving bowls. Garnish with chopped peanuts and pepper corns or sliced green onions if desired. 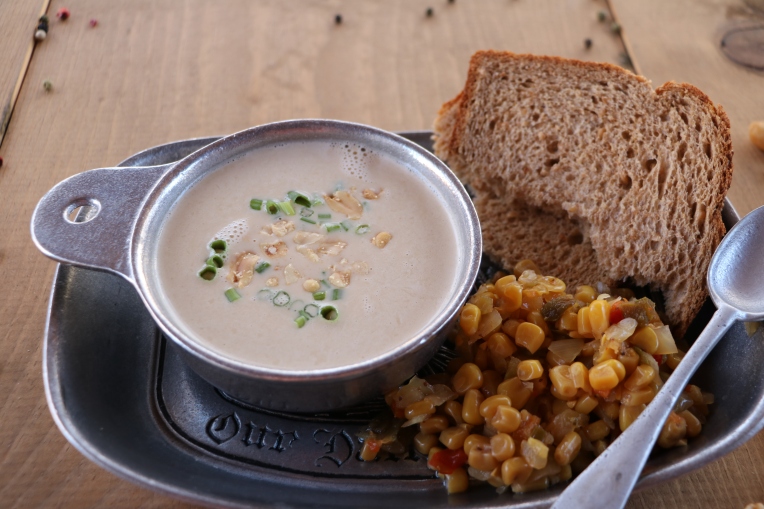 The Kings Arms Inn served the soup with a sampling of corn relish, ham relish, and pickled watermelon. Just for fun, we bought a jar of corn relish to take home.