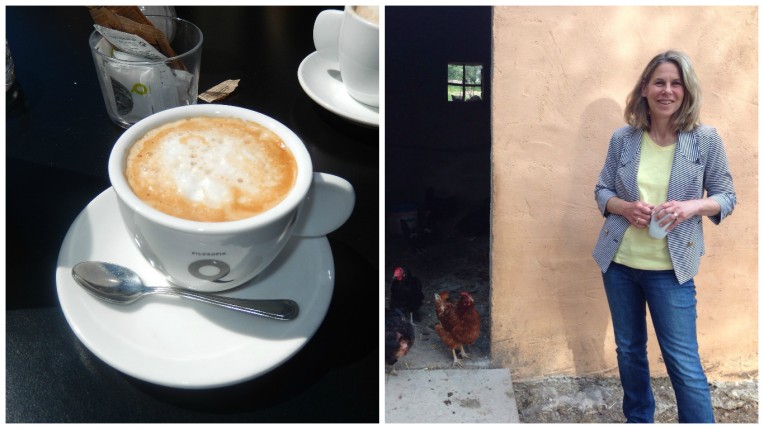 On the left above, is one of the several cups of coffee I had the first day I was in Spain; the photo on the right was taken just before heading to the airport to return home.

Just about a year ago, we had a great time visiting Allison in Spain. She was employed by a program that places native English speakers as teachers in secondary schools. During her week of spring vacation, Roy, Jennifer, and I met her in Madrid. We spent a couple days there, drove a rental car to Portugal, and then returned to Spain where we explored Seville, Barcelona, and finally Ibiza. A few weeks ago I woke up to the fact that I hadn’t done much sharing of our trip, so I blogged about Mannequins, Markets, and Tortilla Espanola. Here is my documentation of how I fell in love with  Cafe con Leche and some of the delicious things I ate while sipping it. 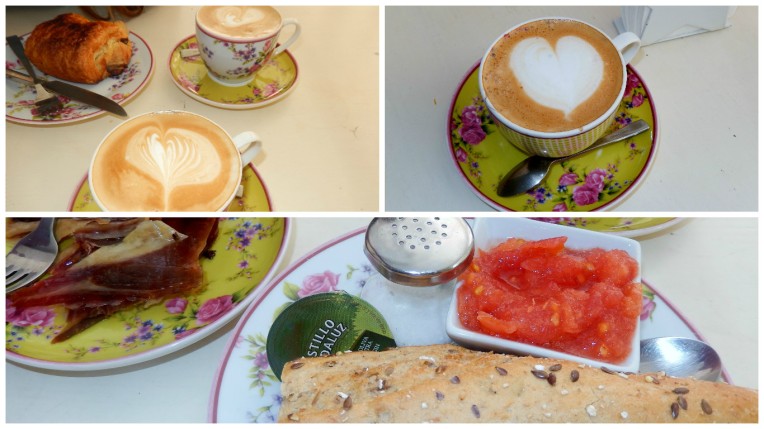 Roy and I flew into Madrid within minutes of when Allison landed there from Ibiza. We had agreed on where to meet ahead of time by using the map on the airport website. I was excited to see her, but also so impressed at her ability to figure out the subway system and guide us to our Airbnb apartment. After dropping off our suitcases, we explored our neighborhood and discovered a little cafe just down the street. It was there that I had my very first Spanish breakfast and cup of coffee. I followed Allison’s lead and ordered Pan Con Tomate ( bread with tomato) and a side of jamon iberico (Spain’s famous ham) just for the fun of it. Basically a DIY deal, it was up to me to slather the grated tomato onto toasted bread which had been rubbed with a little garlic. Then I sprinkled it with coarse salt and drizzled it with olive oil. If that wasn’t delicious enough, I added some of the ham on top and thought it was about the best breakfast I ever had. The cafe con leche was just the thing I needed for my jet lag. It’s made by pouring a shot of espresso into a cup and then filling the rest of it up with warm milk. The designs seen on top are achieved by pouring the milk in second with an experienced steady hand and using a toothpick to coax it into shapes such as hearts. I found coffee made this way so yummy, that I wanted to stop and have a cup of it every chance we got.

Slice and toast pieces of baguette. Lightly run the garlic clove over the top. Grate the tomato into a bowl, discarding the skin. Slather the tomato pulp on the toast. Drizzle with olive oil and sprinkle with coarse salt.  Nice additions are the Spanish ham or sausage and manchengo cheese; either can be found in a specialty store or Whole Foods.

The next day Jennifer joined us and it was her turn to deal with jet lag. A friend of Allison’s had told her about a bar in one of the Madrid neighborhoods that had great food. We took the subway over to it and found it was just a “hole in the wall”, but the food really was delicious. We munched on crusty bread, triangles of manchego cheese, and an impossibly tender meat dish that must have cooked in its perfectly spiced sauce for several hours. I attempted a similar dish in a post written soon after we returned,  Tapas Inspired Braised Meat in Port Wine Sauce . While we were eating lunch, Jennifer ordered a coffee. It was delivered to her as a shot of espresso in a glass. I was surprised, but found out later that serving coffee that way was not uncommon.

At the tail end of our trip, we ended up in Ibiza. It’s a legendary place for Europe’s rich and famous to frolic, but Allison worked their during the off season and never was fully exposed to how riotous it is reported to be! It seemed pretty tame while we were there, but there was no denying how absolutely breathtaking the raw beauty of the island was. For a sample of Ibiza photos, visit this post on Allison’s entertaining blog Naptime with Yasmine. One afternoon after wandering about, we stopped to watch the sunset and grabbed (of course!) a cup of coffee. We also ordered a slice of Allison’s favorite dessert, Flao. It is sort of like a cheese cake in a pie crust. The version Allison liked best was made from goat cheese and flecked with minced spearmint. Click here for a recipe I found on the web . I’m also going to post a photo of recipe I downloaded from http://www.Ibiza.Travel because I think it might be more authentic to what we sampled. Full disclosure: I have not tried making this yet, but hope to make it for Allison some day! 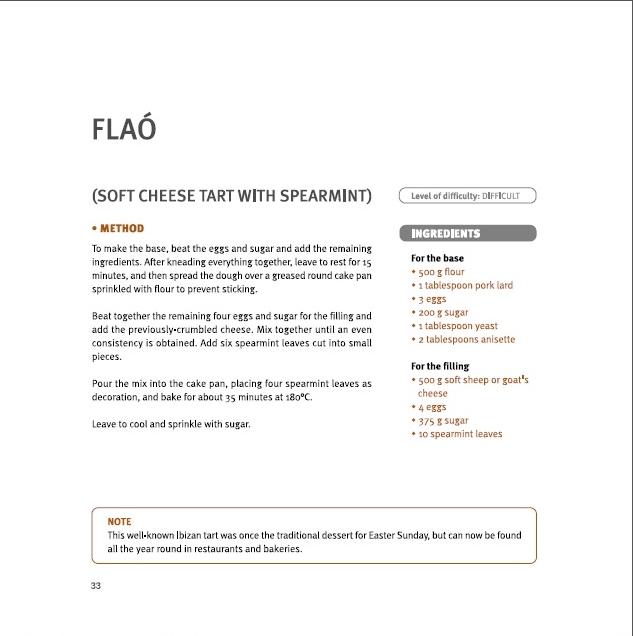 Now, a year after our trip, I still drink my coffee with half a cup of warm milk in it. The other half is rarely actual espresso; the majority of the time it’s just regular American coffee. Thank goodness for microwaves – right?