When Allison came home after spending a day in Northern Indiana doing research for an article she is writing about the Amish community and the RV industry, she told me she had sampled the best doughnut of her life. She said the locals call them “Amish Crack” because they are so delicious and addictive. I’m not a baker; most of my cooking involves dishes that are tasty – but fast! (Visit the Yates Yummies blog) Roy always laughs and says everything I make takes 15 minutes tops, so I’m not geared to the patient process of waiting for dough to rise. Plus I lack a basic understanding of the chemistry aspect of baking. However, after Allison found a post on Finding Harmony Blog that documented the author’s attempts at duplicating Rise’n Roll Bakery’s Cinnamon Caramel Doughnut, I had a desire to join in on the search for a recipe. What a wild ride! After several attempts I managed to cover every surface of my kitchen with a thin layer of flour and/or confectioners sugar and had some spectacular failures (think rock hard or envision a tire deflating).   I’ve documented what I learned below, along with the recipe I finally settled on. If anyone out there tries it, I would love to hear feedback! Likewise, if there is a better recipe for these delicious morsels, please share! To print out the recipe, scroll down to the bottom of this post and click on the “button”.

Just a quick aside – above and below are photos I took in 2015 while visiting Amish Acres in Nappanee , an attraction/museum dedicated to preserving historic buildings of the early Amish settlers in Indiana.

We spent three days in Nappanee while our motor home was being serviced at the Newmar Corporation. We were able to take a factory tour and experienced a bit of cognitive dissonance watching hustling Amish workers string yards and yards of electrical wires onto the RVs being built.

We also traveled to Shipshewana (above left, and right) and LaGrange (above lower photo right). Except for the slow moving vehicle sign in the back, seeing the horse and buggies is like going back in time.

But let’s talk about the legendary doughnuts.

In the comments on the Finding Harmony Blog post, several people stated that they felt like potato was the secret ingredient needed to make the fluffy doughnuts. First I tried yeast-less potato dough, then potato dough with yeast. I also gleaned ideas from this recipe for Amish Doughnuts. 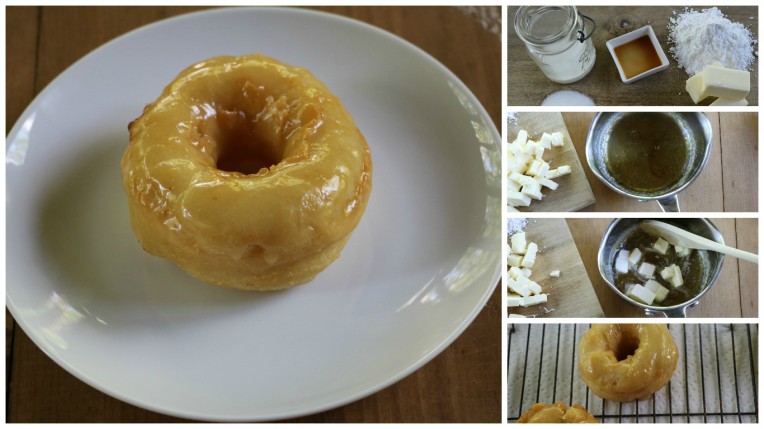 The Finding Harmony Blog post included two possible caramel glaze recipes; one used brown sugar and the other white sugar from the cook book Homemade Doughnuts: Techniques and Recipes for Making Sublime Doughnuts in Your Home Kitchen by Kamal Grant (Quarry Books, 2014). The white sugar recipe was tricky since it involved heating the sugar to caramelize it, but the flavor was truly superior.

So here’s the recipe that resulted from all my experimentation:

Add the Peel and cube potato. Place in sauce pan with 4 cups water. Bring to a boil, reduce heat to medium, and cook for 15 minutes or until tender. Drain the potatoes and reserve the cooking water.

While the potato is cooking combine the all-purpose flour, self-rising flour, sugar and salt in a large bowl.

When it has cooled down to a warm but not hot temperature, place two cups of the potato cooking water in a medium sized bowl and pour the yeast over the top of it. Let it sit for 5 to 10 minutes until it looks smooth but foamy. Give it a stir.

Use a ricer or push the cooked potato through the holes of a colander. Don’t worry if the potato just ends up being mashed. Add the riced or mashed potato to the yeast water and give it a stir. The potato will sort of dissolve and disintegrate into the water.

Melt the shortening and allow to cool slightly. Whisk the eggs together.  Add the melted shortening, whisked eggs, and yeast/potato water to the flour mixture and store with a fork until it is combined. Don’t knead.

Grease the inside of a very large bowl with shortening or butter. Place the dough in the middle and cover with a tea towel. Allow to rise until double. This can take a couple hours, depending on how warm the room temperature is.

After the rising period, punch the dough down and place on a self-rising flour covered surface or pastry cloth. Knead just a couple times, then roll out to a 1/2 inch thickness. Using either a doughnut cutter or a glass turned upside down that is about 3 1/2 inches in diameter, cut out doughnuts. (If using a glass, cut holes out of the middle with an empty spice bottle or something similar.) Place the doughnuts on a baking sheet that has been covered with well greased foil or parchment paper. Cover with tea towels and let rest/rise for 1/2 hour.

Pour the vegetable oil in a large sauce pan. Heat to between 360 and 375 degrees. If working without a candy/cooking thermometer, the oil will be ready when it shimmers and a doughnut hole is surrounded by simmering bubbles when dropped in.

Fry 3 to 4 doughnuts at a time, about 2 minutes on each side. They will be lightly browned. Place cooked doughnuts on cooling racks which are on top of paper towels.

While the doughnuts are still warm, dip them into the Caramel Glaze (recipe below). Finish them off by placing the Cinnamon Confectioner’s Sugar (recipe below) in a fine mesh strainer and giving each doughnut a dusting.

Cut the butter up into small cubes and set aside. Place the sugar and water in a small sauce pan. Stir to combine then place over medium heat and allow to simmer/boil without stirring for around 7 to 10 minutes until the mixture browns but doesn’t pass to the burning point. Do not walk away from the stove! It takes a while to get it going, but once it gets to a golden brown color, it quickly goes to burning. Once it is golden brown, remove the pan from the heat. Heat the cream in the microwave for 20 seconds so that it is warm, but doesn’t boil or curdle. Whisk the warm cream, a little at a time, into the sugar syrup. Add the butter, a little at a time, while continuing to whisk. Whisk in the confectioner’s sugar, salt, and vanilla until the mixture is smooth.

Place the confectioner’s sugar and cinnamon in a small bowl and stir until blended together.