Challenge: How many meals can you make from 10 ingredients? Editor’s note: Here in Melbourne, I’m struggling to find new and creative ways to make easy meals on a budget with the same few ingredients I always buy. I love to eat (and eat healthy). The problem is, I don’t really like to cook and I’m […]

Before I figured out that Yotam Ottolenghi was a rock star in the foodie world, I purchased his 2010 (2011 in the U.S.) cookbook Plenty. The gorgeous picture on the cover of Eggplant with Buttermilk Sauce was nothing short of magical as were the other photos in the book. However, what turned out to be my favorite recipe was the chickpea pancakes (Socca) with cherry tomatoes shared here.  Ottolenghi gave a little background on the recipe and explained that socca, a batter made from ground chickpeas (also called garbanzo beans) is a specialty from the region around Nice, France. I had a package of Bob’s Red Mill Garbanzo Bean Flour that had been sitting in my pantry for a couple months. I had bought it out of curiosity since I figured it might be an interesting alternative to wheat flour; now I had the chance to give it a try. The first time I made this recipe, I followed the directions given below exactly and the result was wonderful. Since then – I have to confess – I skip a few steps and the dish is still great. For instance, I’ve just dropped a whole egg into the batter without whipping up the whites and folding them in. And, I’ve just served them straight from the pan, ladling the delicious onion mixture and cherry tomatoes on top of the pancakes without the extra heating in the oven. The dish is still delectable and meets the time constraints of busy family members!

Preheat the oven to 275 degrees Fahrenheit.  If not done already, rinse the cherry tomatoes and cut them in half. Spread them cut side up in a small baking dish and sprinkle them with salt and pepper. Drizzle with a little olive oil and place them in the oven for 25 minutes. At the end of the cooking time they are tender but still hold their shape.

While the tomatoes are baking, saute the sliced onions on low heat with the olive oil, thyme, and a sprinkle of salt & pepper. After about 20 minutes they should be soft and starting to turn brown. Add the vinegar and taste to see if they need more salt and pepper.

After taking the tomatoes out of the oven, increase the temperature to 325 degrees.

In a bowl, mix the chickpea flour, water, 1 1/2 teaspoons olive oil, 3/4 teaspoon salt, and a pinch of pepper.

In a separate bowl, whip the egg whites to form soft peaks.

Fold the whipped egg whites into the chickpea batter.

Use a slightly oiled, non-stick frying pan, to make the pancakes. Heat up the pan over a medium high burner. Pour in the batter so each pancake is about 5 inches across and about 1/4 of an inch thick. After two minutes, bubbles should appear on the surface. Flip the pancake over and cook for another minute. Then transfer onto a baking sheet lined either with parchment paper or lightly oiled foil. When all the pancakes have been made, place them in the oven for 5 minutes.  Take them out of the oven, divide the onion mixture between each one and spread it from edge to edge. Arrange the tomatoes on top and return the pancakes to the oven for 4 additional minutes. Serve warm with the creme fraiche (or Greek yogurt) on the side. 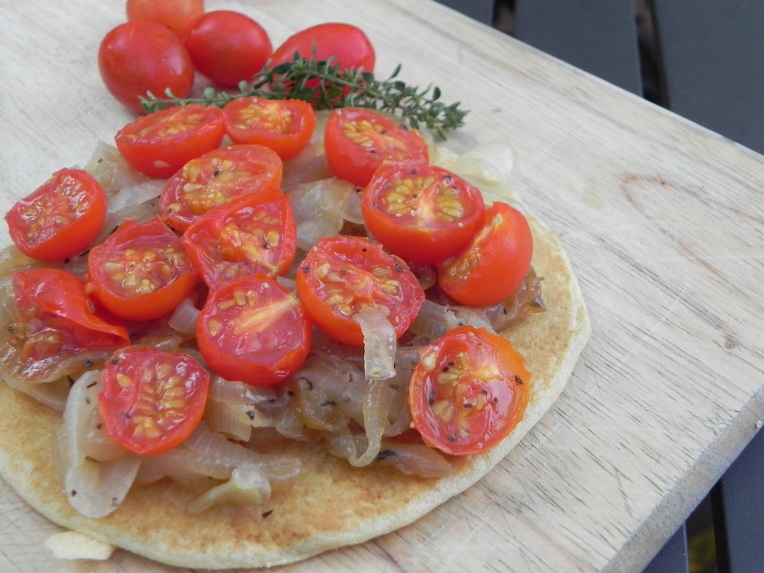